Some time ago Moriel dismissed a Mr. Tim Wirth for reasons of ineptitude and financial ethics. His endless appeals for money that continue to this moment, beseeching Christians to subsidize his failure as a fired disc jockey and unsuccessful rock musician became ridiculous and embarrassing. Money borrowed was never repaid and his work quality & reliability were highly inadequate.

Moriel however, is focused on doctrine. We have long warned of the heretical content of TBN, even prior to the homosexuality & financial scandals being reported repeatedly on the front page of the LA Times. The TBN  money preaching was injurious to the testimony of the Body of Christ.

We also opposed the dangerously false teaching of Hillsong even prior to the highly publicized sexual & financial scandals. The 'serve the Roman Catholic church' hyper ecumenical policies of Darlene Zscech with the pedophile protecting Pope John Paul II, were highly troubling to us. So too were were the blasphemous 'Naked Cowboy' and 'Jesus in Drag as the Statue of Liberty'' fiasco by Hillsong in New York exposed by the secular media.

The Royal Commission investigation in Australia declared Brian Houston culpable of protecting his homosexual pedophile father Frank in a series of moral fiascos that rocked Hillsong on top of the NY media mess of Hillsong's Carl Lenz degradation of Christ.

Tim Wirth's Website No Goofey Zone has Mr. Wirth declaring his tenure playing with Hillsong and with Darleen Zcech to be a "BLESSING", and boasting of his work with TBN.

This kind of repertoire & CV is to Moriel a shame and a disgrace and not something to count as a 'Blessing'. TBN is nothing to boast of. This manner of self promotion by Mr. Tim Wirth further confirms the impetus for Moriel getting rid of him.

Many Christians think that Hillsong above all is an enterprise that is about money (as was revealed in an Australia TV news documentary). Many also found the unceasing emphasis on money by TBN was much the same thing.

Among many of us who know him ands who have dealt with him, Tim Wirth is a less successful version of the same thing.

Doctrine and ethics had little place in Hillsong or TBN. Lo and behold - Tim Wirth. 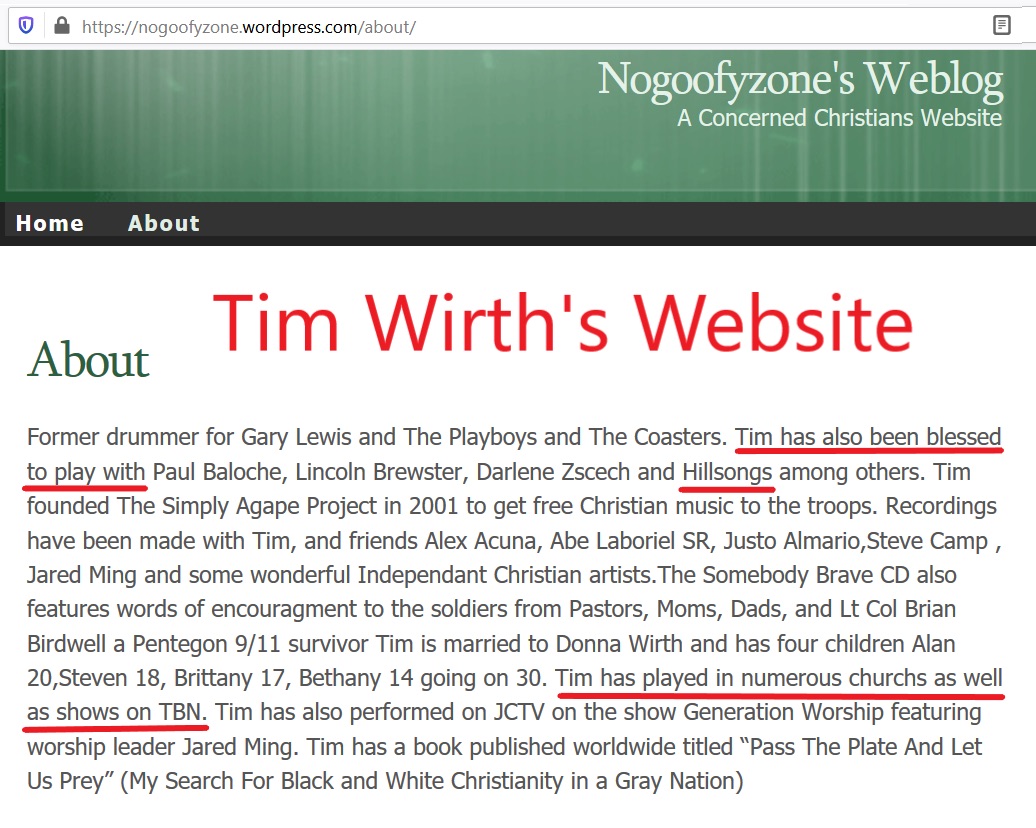